It’s all been a little hectic lately but largely in a good way. The Olephant, Pose and I had a fantastic bank holiday weekend and it felt like a real treat to have three days together during term time! To top it all, after three days of family fun we were still speaking to each other in a more or less civil manner. Minor miracle achieved there, as fairly similarly to Ollie, if I am over rested or over tired I’m insufferable. I need to be the right level of tired for Pose to tolerate me for more than a few hours at a time. It’s also worth mentioning that, whilst Olliebob is amazing, being his main source of entertainment is exhausting and you end up feeling a tad bullied and hassled beyond thinking. Hats off to stay at home parents, as I’d be cowering in a corner clutching my own special bottle a few weeks in. Clearly spending three days with my son and wife makes me some type of hero.

The weather meant that Ollie and I got to play outside pretty much all day every day which was just brilliant. Being outside on the grass has had dual benefits; firstly, Ollie just needs a hell of a lot of space to strut his funky stuff in and secondly it provides the little Pachyderm with plenty of soft landings, which given that he’s two and has the balance normally associated with several glasses of wine, is lucky. On top of Ollie’s standard instability, other developments make soft landings handy such as the fact he has decided that running is the only method of ambulation cool enough for him and most excitingly he has just learnt to jump! Well, more or less, sometimes it’s more of a hop as he forgets that he needs both feet off the ground. So to summarise he’s unstable, runs most of the time, when not running is jumping and he inevitably falls over.

It was quite a busy bank holiday weekend for us as we’ve found we need activities constantly to keep Ollie and I entertained. Pose is much more mellow in this regards but as previously mentioned I become annoying unless properly tired out so she tends to encourage us being busy.

We ventured forth to Cirencester and St Mark’s park which was brilliant. Ollie tore his way all over the park for an hour or two with only the occasional stop for a quick hug and some ice cream. I’ve alluded before that the Olephants eating habits need a little refining and this was certainly the case with the ice cream this time which doubled as a face mask by the end of it’s slurpie demise. As it was very sunny Ollie was thoroughly greased up with sun tan lotion which seemingly doubled as a dirt and grub magnet. This lotion/dirt combo mixed with Ollie’s ice cream facepack meant that we were forced into a retreat to the swimming pool (with a hosing down before entering!) to cool down somewhat.

For this we headed to Swindon Oasis. Whilst Swindon is not the most charming place the Oasis is just brilliant. Ollie as might be expected by now, thoroughly enjoyed himself and in a change to his last visit actively enjoyed the wave machine. I honestly don’t think I’ve come across a small child so willing to throw himself into everything, he’s just a star sometimes. We stayed bobbing about for an hour or two then headed home with Pose happy that the activity had sufficiently tired both Ollie and I out.

This was a little bit of a cheat day for us as we abandoned Ollie for a large part of the day with Pose’s mum and Sister, whilst Pose and I headed off to watch ‘Avengers: Infinity Wars’. 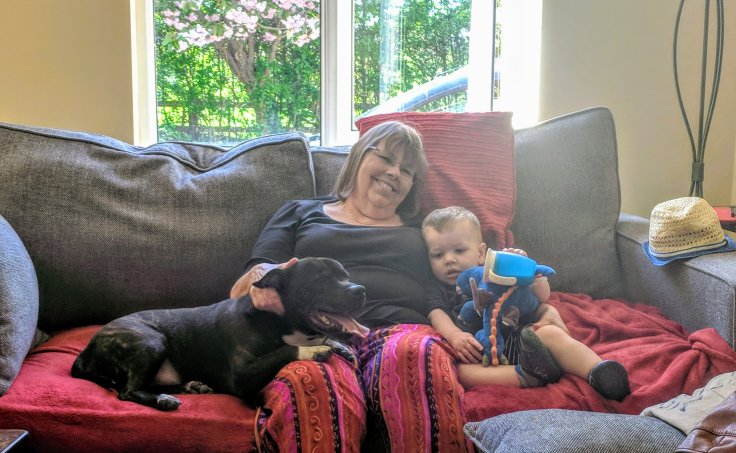 No spoilers, but Pose was astoundingly angry with the world in general due to the ending. Ollie had a frankly fantastic day with a lot of fun and frolicks. He managed to find time in his hectic schedule of paddling and chasing Auntie Charly’s new puppy (Zuko) to pose for this classy photo: 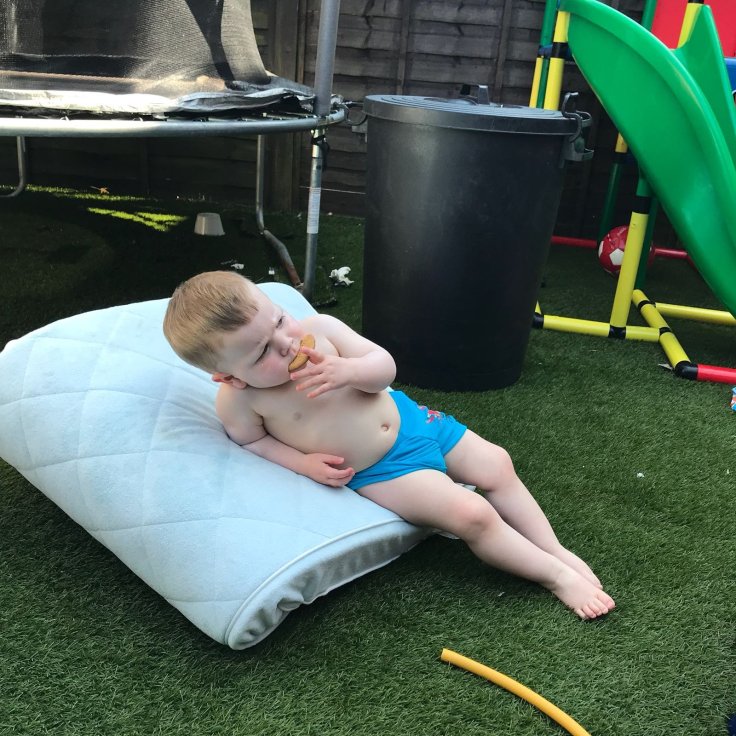 The day didn’t end there though as Ollie, Pose and I went to pay a quick visit to two of Ollie’s God parents, Len and Chloe.

As ever it was ace to catch up and Ollie had perhaps one of the highlights of his little life when he got to bottle feed a lamb!

Honestly he was so ridunculously happy I could almost forgive how he walked through lots of sheep poo then climbed all over Pose and I covering us as well. Almost. From Len and Chloe’s we headed to my Dad’s for a lovely dinner out on the patio in the garden. A lovely end to a very long, but ace day.

To start the day we headed to the Mayday celebrations in Carterton. It was fairly nice, but the politest way of putting it, was that it wasn’t our cup of tea, so we did a once around and then headed off. Ollie did love his first ever slush puppy though so a partial success.

After a brief rest at home we headed out once more this time to Juey and Charlie’s for a lovely BBQ. They really are brilliant hosts and catching up with everyone is always a massive treat. We don’t do it enough and Pose and I need to get our act together in that regards. Ollie had a fantastic time eating his fill and playing with Juey and the dogs. It was also Pose’s turn to drive so I may have had a cheeky beverage or two.

That final activity complete, the bank holiday for us was done. It was absolutely brilliant and just makes us all look forward to half term which isn’t far away.